B2S 1: Back to School Food and Snacks

I meant to start posting these about a week ago, when school was a little further away, but at least here in Canada, school has still yet to start, so I think I have some more time. (I know from YouTube that it seems that in some places schools restart a bit earlier, but here in BC school starts again after Labour Day.) The posts are going to be going up on both this blog and my beauty blog—My Glittery Obsessions—since some of the content won’t make sense here, and vice versa. So make sure you check both blogs to get this whole series!

That said, I want to share with you some of my favourite lunch and snack foods/tips for school, especially some that may help keep you from reaching for the expensive, unhealthy alternatives that are readily available at many schools. It’s easy to find pre-packaged, portable snack food at the grocery store, but it might not be quite as easy to decide which ones are actually kinda good for you. And often it’s worth it to do a little more work yourself for a more nutritious, but still healthy, snack.

1. A water bottle is essential, and may keep you from heading to the overpriced pop machines when you get thirsty! In all technicality, any water bottle will do, but I suggest spending a little money to make sure that you’re getting a nice one that won’t hurt either you or the environment: you want to stay away from disposables and BPAs! My two suggestions are:

Not only are Bobbles cute, but they filter your water for you. This is great if you’re a little picky about drinking tap water like me, if your city’s water has lots of additives and doesn’t taste very good, or if you just like to make sure your water is clean.

As you can see in the picture, the cap is also the filter. Bobble suggests that you replace the filter after two months or 150 litres, but you probably aren’t going to drink a 150 litres in 2 months, so I would say you can probably change it every six months or so depending on your usage. If you’re worried about sanitation, or if your filter tastes a little funny, boiling it for a couple minutes fixes the issue, in my experience.

One con to this option is that the bottle itself is a fairly thin plastic, and if you’re rough on your waterbottles, it isn’t hard to dent or maybe break this one, so that’s something to keep in mind. They can also make a fair bit of noise letting air in through the filter after you take a sip, which can be embarrassing in class. If you want to see size and colour options, you can go to WaterBobble.com. 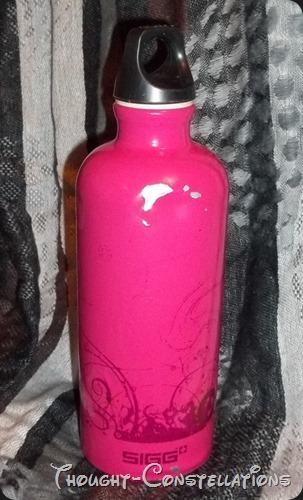 Considering how fragile the Bobble can be, my other suggestion is to get a metal water bottle. These can be a little more expensive, but the pricier ones keep your water from tasting metallic.

Though they won’t filter your water, the great thing about these bottles is that they are super durable. If you’re the type of person who can be a little clumsy, a metal waterbottle might get a little beat up looking, and it may dent if you’re throwing it on the concrete, but ultimately they’re pretty hard to damage.

They also last for ages. I’ve had mine for years, though it doesn’t look as good as it did at the beginning, and I don’t worry about it as much as I might worry about my Bobble. If you want to look for a metal water bottle, mine is from Sigg (MySigg.com), though there are other good brands that make similar products, such as KleanKanteen and One Green Bottle. (After a little research for this post, I’m now considering getting one of these bottles from Klean Kanteen, which also doubles as a Thermos or coffee mug!).

Yogurt can be an easy, healthy, and delicious on-the-go snack, and if you bring along a small baggie of granola or trail mix as well, then you have a DIY yogurt parfait! My favourite is honey or vanilla flavoured Greek yogurt, but obviously choose whichever you prefer, just try not to get one that has too much fat or sugar.

This product is a great option for coffee on the go, without paying cafe prices on or near campus or settling for crappy coffee. Also, though this is technically instant coffee, it certainly doesn’t taste like it. Instead it tastes almost exactly like a fresh cup of Starbucks coffee. There are also, at least during the summer months, flavoured iced Via and Refreshers options, though I don’t recommend the Refreshers, since they use fake sugar, while the In-store version is made with actual sugar! These are especially great if your school has a coffee shop or cafeteria that won’t mind you using their cream and sugar (or if you like your coffee black).

These also make good healthy snacks for if you just need something to nibble on; cucumber, carrot sticks, celery, cherry or grape tomatoes, or whatever your favourite veggies are… toss them in a plastic bag or plastic container, and you’re good to go. Also fruit or fruit salad; fruit salad great because you can cut up a bunch of fruit, toss it together, and portion it so you have snacks for the whole week. If you have access to a microwave, get yourself a good airtight container and you can bring soup, pasta, or leftovers with you to school, instead of boring sandwiches every day, or expensive restaurant food at school, which can really add up both in money out of your wallet and calories into your body! Make sure the containers you get are BPA free and microwave safe!

If you are like me and like salty snacks, a great alternative to chips is popcorn, which is full of fibre, salty, but much lower in fat than chips, unless you drown it in butter! My favourite is smartfood, but you could pop your own and season it with whatever you like, such as salt, parmesan cheese, seasoning salt, basil and oregano, garlic... play around with it!

If you’re anything like me, then maybe figuring out what to eat isn’t the problem so much as having the time to make sure you’re eating it. In my own case, I know that if I want to make sure to bring my own snacks and meals to school, then I need to make and package them the night before. If you’re rushing to get to class on time, you may not have time to put together some good food, and will opt to grab something unhealthy and/or expensive during your break on campus. Pre-packaging your food the night before will help you avoid this, since you’ll only have to grab it out of the fridge in the morning.

Obviously these are just very general suggestions. There are tons of other tips for eating healthy and cheap away from home, but I hope these ones give you some ideas for the upcoming semester/school year!

Let me know your tips for healthy, affordable eating in the comments! Thanks for reading!

Other posts in this series

Email ThisBlogThis!Share to TwitterShare to FacebookShare to Pinterest
Labels: Back to School, food, randomness, school

Stuff I talk about: